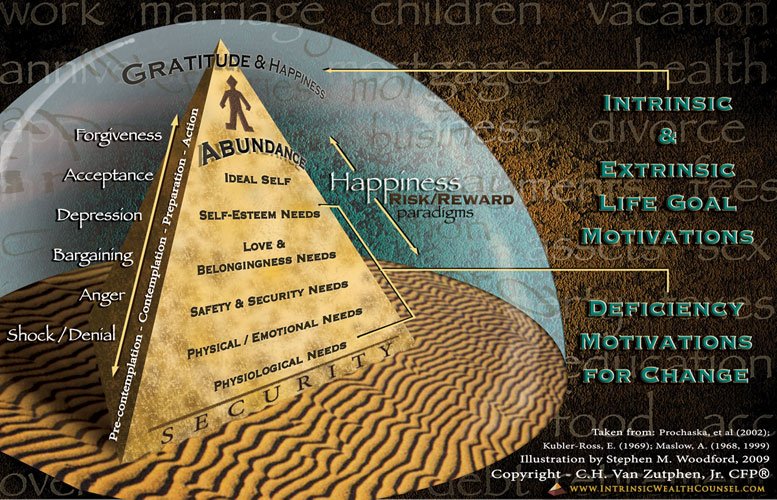 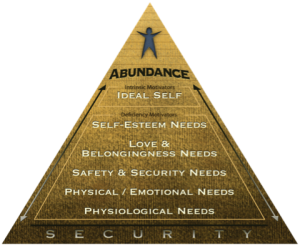 “Our deepest fear is not that we are inadequate. Our deepest fear is that we are powerful beyond measure. It is our light and not our darkness that most frightens us. We ask ourselves, who am I to be brilliant, gorgeous, talented, and fabulous? Actually, who are you not to be… you’re playing small does not serve the world. There is nothing enlightening about shrinking so that other people will feel secure around you.” Marianne Williamson

– Striving toward one’s ideal self, toward autonomous self-regulation, a striving for personal mastery, to experience flow, to develop realistic appraisals of oneself and others

• To paraphrase Carl Rogers “Self-actualization is an underlying flow of movement toward constructive fulfillment of … inherent possibilities. It is an individual’s or couple’s ever-fuller realizations of one’s talents, capacities and potentialities. To embrace and enjoy the journey.

– It is not a Stimulus → Response World

– It is an emotionally and socially intelligent world where stimulus evokes thoughtful response, employing the power of choice (Viktor Frankl)

– It is an abundant, interconnected & interdependent world of possibilities

• To nurture others toward their ideal selves

• Intrinsically motivated to enjoy the journey

– Forgiveness of self and others

“…forgiveness still allows for holding the offender responsible for the transgression, and does not involve denying, ignoring, minimizing, tolerating…or forgetting the offense.” (vanOyen Witvliet, et al. 2001, 118)

– “Heartfelt expressions of love and appreciation are associated with a smooth, ordered, coherent pattern in the heart’s rhythmic activity

– the magnetic field produced by the heart is more than five thousand times greater in strength than the field generated by the brain and can be detected a number of feet away from the body, in all directions

– a person’s cardiac field is modulated by his or her different emotional states, several studies have now documented that the electromagnetic field generated by the heart may actually transmit information that can be received by others.”

– “When two people are at a conversational distance, the electromagnetic signal generated by one person’s heart can influence the other person’s brain rhythms. When an individual is generating a coherent heart rhythm, synchronization between that individual’s brainwaves and another person’s heartbeat is more likely to occur.

• The Heart/Brain wave connection has been measured between individuals up to five feet apart.

• “This deep form of communication establishes a heartfelt connection between people, resulting in perceptions of, among other things, really being understood and appreciated by the other.”

• “So when a person expresses heartfelt gratitude toward us, there is the potential for us to experience all sorts of benefits driven by this exchange of electromagnetic energy.” (Emmons, R. A., THANKS, How the New Science of Gratitude Can Make You Happier. New York: Houghton Mifflin Company, 2007, (87-89)

Where are you now?

When faced with change, we can embrace, learn and grow or resist and close down. Eventually, whatever changes have taken place we eventually grow to accept the change. Research has shown that when we can identify “where we are” in the stages of change, and when we can identify the specific emotions (verbally) we are feeling, the more effective we become in managing the emotional and cognitive stages of change. Moreover, we are better able to think twice about the situation and determine better solutions that foster healing and growth.

The choice you make when under the stress caused by change is to decide whether the change has you or you have it. When you can decide that you have it is the point where you gain greater control.
Lastly, when changes do take place you are far better off discussing the challenges with a trusted friend or advisor to increase your chances of making the very best decisions for both your short-term and long-term needs and goals.

Elisabeth Kübler Ross, MD outlined the 5 stages of death and dying as:

Additional research suggests that there are 3 more stages to follow, they are:

– no awareness of any problem or need for change

– beginning to gather information and developing a plan for change

– taking steps to actually change – remove deficiencies, add a new way of living, building a preferred future because they value the possible over the present

– no risk of going back – client has fully integrated their life plans, and their preferred future behaviors are aligned with their core values and beliefs

Additional research suggests that there are 3 more stages to follow, they are:

The Symbolic Power of Money by Zhou, X., Vohs, K.D., & Baumeister, R.F outlines some of the pervasive affects money has on our psychological and physical well-being.

• Recollections of having spent money make people feel weaker (why people hate tracking expenses and budgets and why the great recession feels so bad).

• The thought of money can affect how we perceive physical pain and social rejection.

– Psychosomatic medicine has found that social isolation tends to raise stress hormones and blood pressure, and weakens the immune system (Begley, “All in Your Head? Yes, and Scientists Are Figuring Out Why…” WSJ, B1, 17 Mar 06)

– Money can be a substitute for relationships

o Sex
o Spouses who remain in marriages “for the money”
o Doing it, whatever “it” is for the money degrades the sense of self and increases the risks of materialism

– In other words, the belief that a paper loss is real and permanent makes physical pain worse

• In a separate study a significant loss of money, death or divorce can cause “broken heart” syndrome and death. (Winslow, R., “Hearts Actually Can Break”. WSJ, D1, 9 Feb 10.)

• The primary effect of the idea of money is to promote:

– General feelings of strength, efficacy and confidence and these feelings act as a buffer against social rejection and physical pain.

The greatest achievement was at first and for a time a dream. The oak sleeps in the acorn; the bird waits in the egg; and in the highest vision of the soul a waking angel stirs. Dreams are the seedlings of realities.

Your circumstances may be uncongenial, but they shall not long remain so if you but perceive an Ideal and strive to reach it. You cannot travel within and stand still without.

Here is an individual hard at work. He conceives of and mentally builds up an ideal condition of life. The vision of a wider liberty and a larger scope takes possession of him; unrest urges him to action, and he utilizes all his spare time and means, small though they may be, to the development of his latent powers and resources. Very soon, so altered has his mind become that the workshop can no longer hold him. It has become so out of harmony with his mentality that it falls out of his life as a garment is cast aside, and, with the growth of opportunities which fit the scope of his expanding powers He passes out of it forever.” (As a Man Thinketh by James Allen)

• “…people who choose to devote their lives to the pursuit of the “American dream” (the pursuit of money, fame, and popularity) suffer more:

– higher-quality relationships with friends and intimates

• When the pursuit of money is motivated by one’s integrated extrinsic and intrinsic motivations there is no negative impact to one’s subjective well-being and enables the pursuit of self-actualization. (Sirvastava, Locke, Bartol)